A little while ago, I wrote about fixing the zoom ring on the Tokina SD 28-70mm lens that I got with a parts camera. Fixing the focus ring took a little more effort, and it needed to be done during the day so I could test infinity focus with a distant object, but it followed roughly the same principles.

As with the zoom ring, the focus ring was held together by scotch tape as suggested in this MFlenses forum post. The scotch tape’s adhesive had degraded to the point it was a slimy mess. However, the focus ring’s function is a little different. Below the focus ring rubber is a join between two parts: the rearmost is a metal ring that bears the distance markers and the focus stops, and the foremost is a metal ring that forms part of the front lens group’s mounting (on this lens, the front group rotates when focusing). The ring with the markings can come away from the front ring and move a considerable way down the lens barrel, which lets the front group move freely. Calibration of focus depends on sticking the two rings together in just the right alignment, ideally aligning the infinity marking with the correct focus stop when the lens is perfectly focused at infinity. 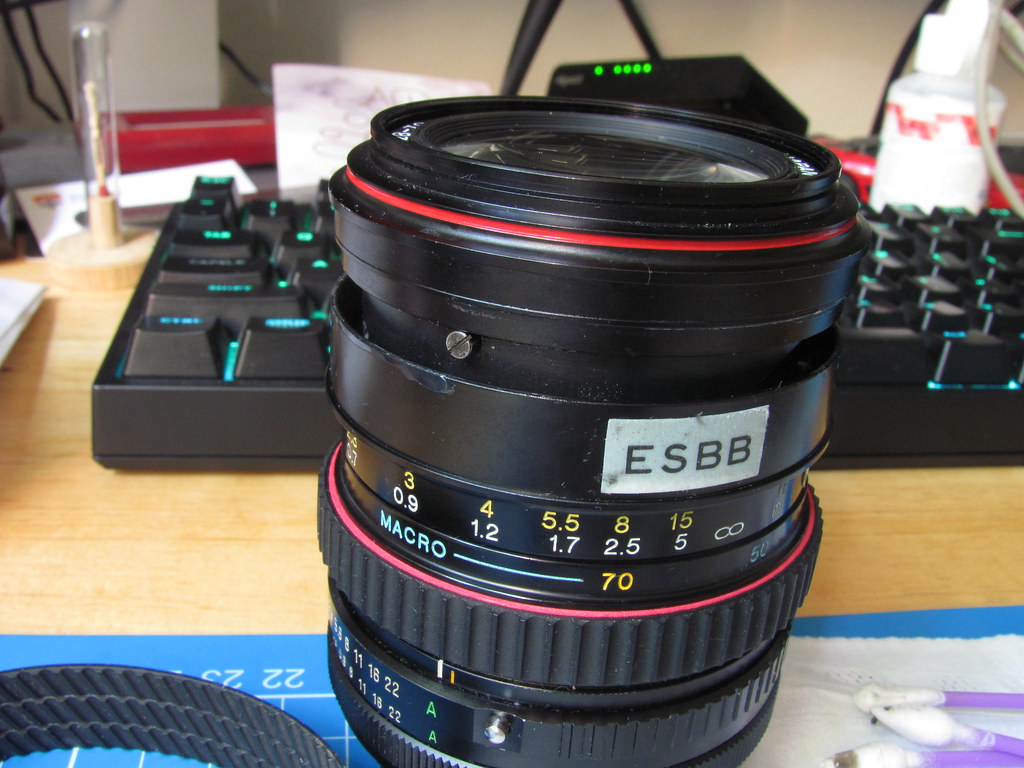 Because the ring with the markings can move a long way down the lens barrel, the scotch tape adhesive had a lot more scope to get into the wrong places. It soon became evident that I needed to remove the front element to clean it all up. And it’s just as well I did — it seems that someone had attempted this repair in the past, as there was a great big fingerprint on the rear lens element of the front group. I hadn’t noticed this when inspecting the lens optics, but I was grateful for the opportunity to clean it up. 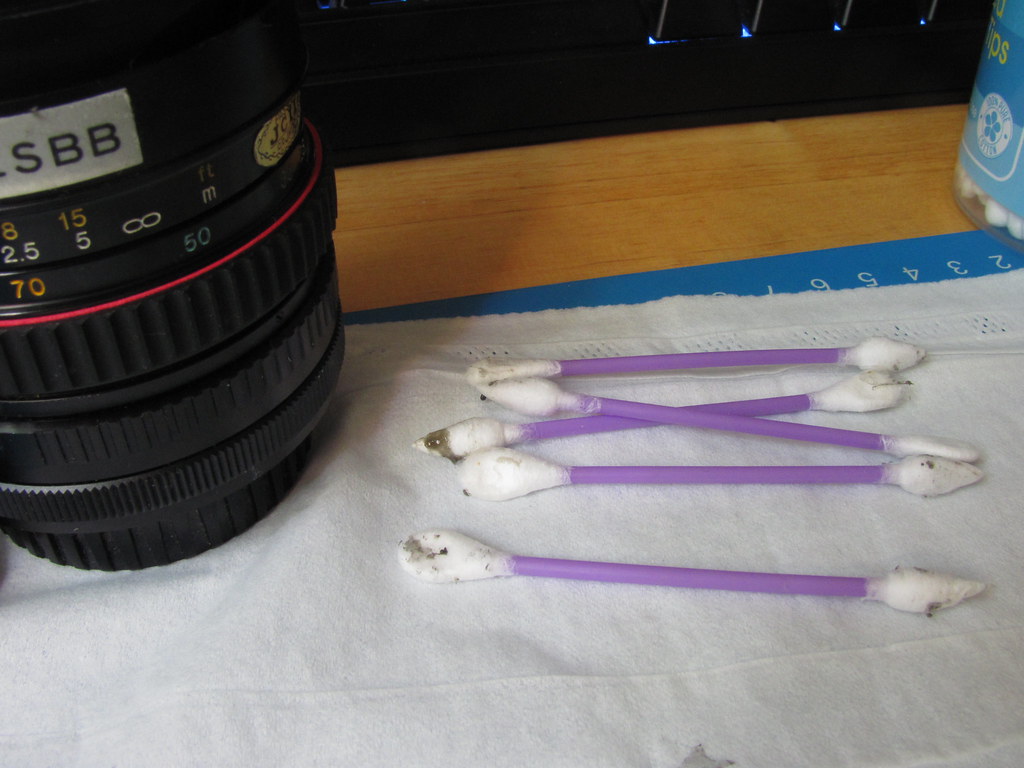 Once cleaned up, I reattached the front element (I don’t think I got the alignment correct, but as the front element rotates on this lens I don’t think it matters greatly), then put it on a camera and went outside. I focused the lens on an apartment block about 10km away by rotating the front element directly, using the camera’s split image to get a decent focus. Then, I aligned the markings ring with the infinity focus stop and used a small piece of scotch tape to fix it in place. Then I checked by focusing on closer things then back to the apartment block, and also by focusing at 28mm zoom instead of 70mm. I got it as close as I could, erring beyond infinity slightly if anything. 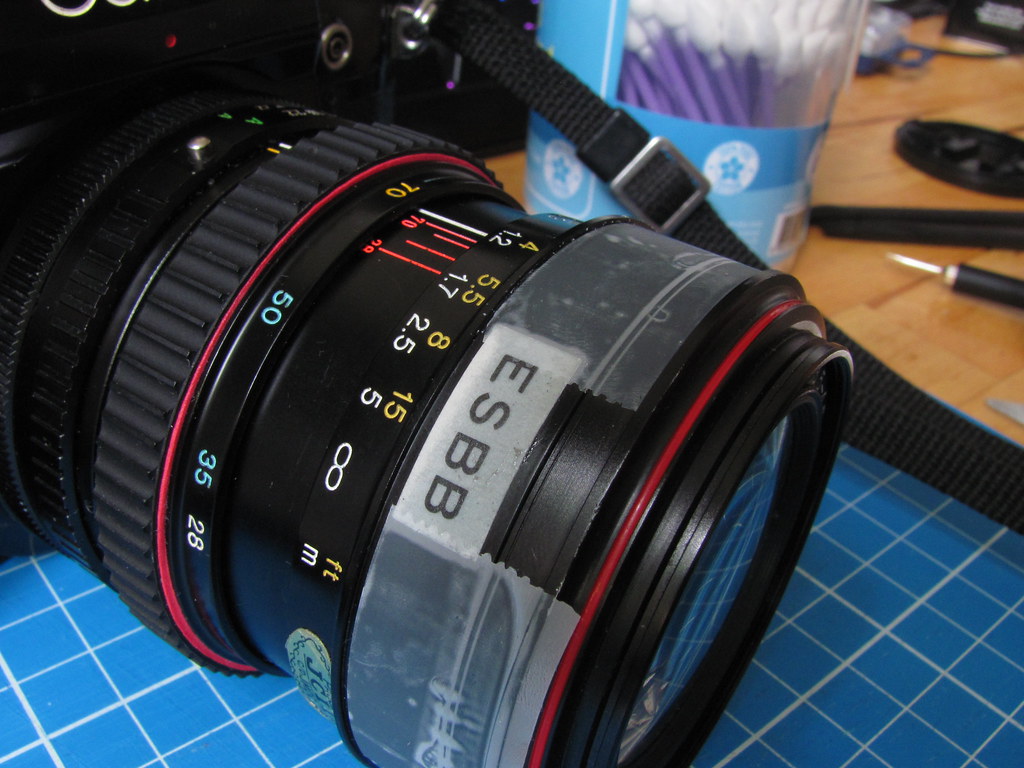 I fixed the ring in place more securely with two more pieces of scotch tape, then put the focus ring rubber back on. This one hadn’t stretched like the zoom one had, so it didn’t need any padding. 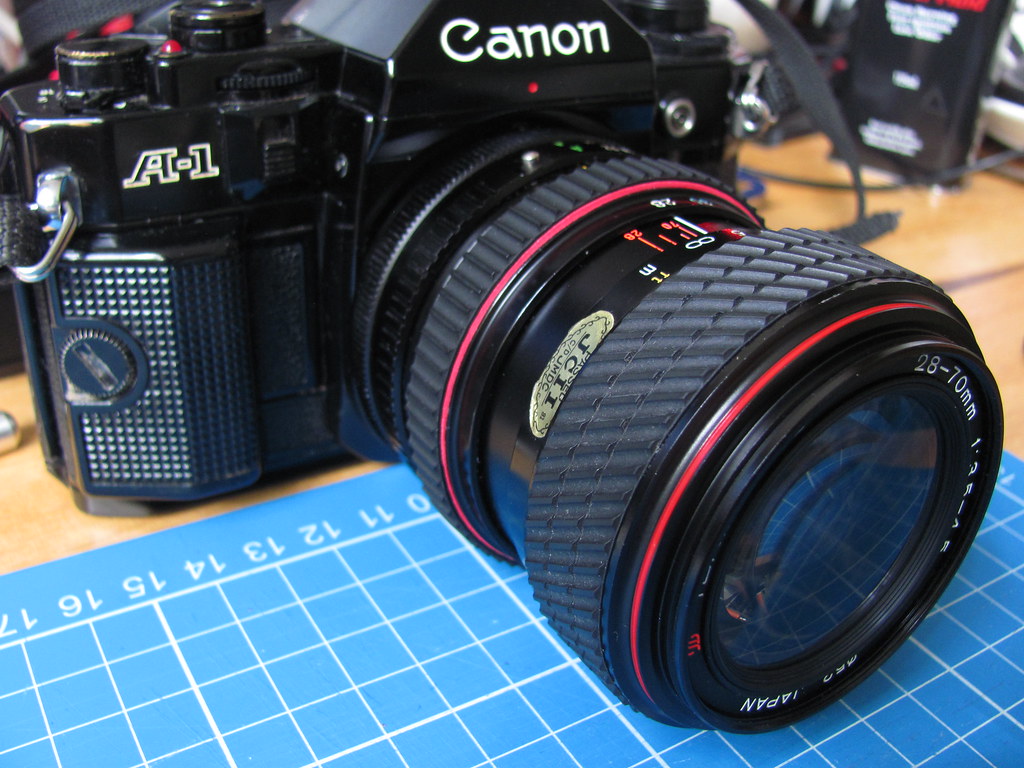 With both rings repaired, the lens is now basically back to normal. It’s not the most amazing of lenses, and it has a strange rotational feeling when taking a photo (possibly the aperture mechanism is a bit out of alignment), so it might need some further work. However, it’s much more usable than when I got it, so I count it as a win so far.

I recently bought a camera as parts, and it came with a Tokina SD 28-70mm 1:3.5-4.5 lens. This lens was in a bit of a state, and I already have a Canon 35-70mm FD mount zoom, but I felt like I had to at least try to repair it on principle, you know? The optics of the lens seemed fine, but the focus and zoom rings were both out of action. The focus ring moves the focusing element, but can also slip backward, lose contact with whatever holds the focusing element, and spin freely. The zoom ring was relatively stiff, though the rubber was loose and would easily slide around the ring. I tackled the zoom ring first because it seemed easier.

Prompted by this MFlenses post, I removed the zoom ring rubber and confirmed that the scotch tape holding the rings together was indeed the culprit. I still can’t believe that the fairly critical worky bits of this lens are basically held together with stationery (but this does seem to answer the poster’s question about whether this is how these Tokina lenses came from the factory). The scotch tape’s adhesive had degraded to the point that it was a fairly slimy lubricant and was doing very little to hold things in place. I removed the tape, and then removed its disassociated adhesive with a small amount of isopropyl alcohol on a cotton bud.

Because the zoom ring rubber had also stretched, applying fresh scotch tape wouldn’t have fully fixed the problem. I had been impressed by the stickiness of the self-adhesive craft foam I used to repair the Ricoh 500G, and thought that it might make a decent substitute. Since it came in a multicoloured pack, I also decided to follow this guy’s lead and have some fun. The lens has a red ring around the business end, so I used some red foam cut into a strip of the appropriate width with a rotary cutter. The foam sheets weren’t quite long enough to reach around the circumference, so I cut an extra piece to match and made sure it was on the bottom of the lens barrel when attached. I tested rotation at this point – it stuck well and the ring was easier to move. I then replaced the zoom ring rubber, which fit quite snugly over the top of the foam. I think, despite the colour of the foam not quite matching the red at the end of the lens, it matches the lens’s aesthetic quite well. And it is definitely easier (read: actually possible) to use the zoom ring now. 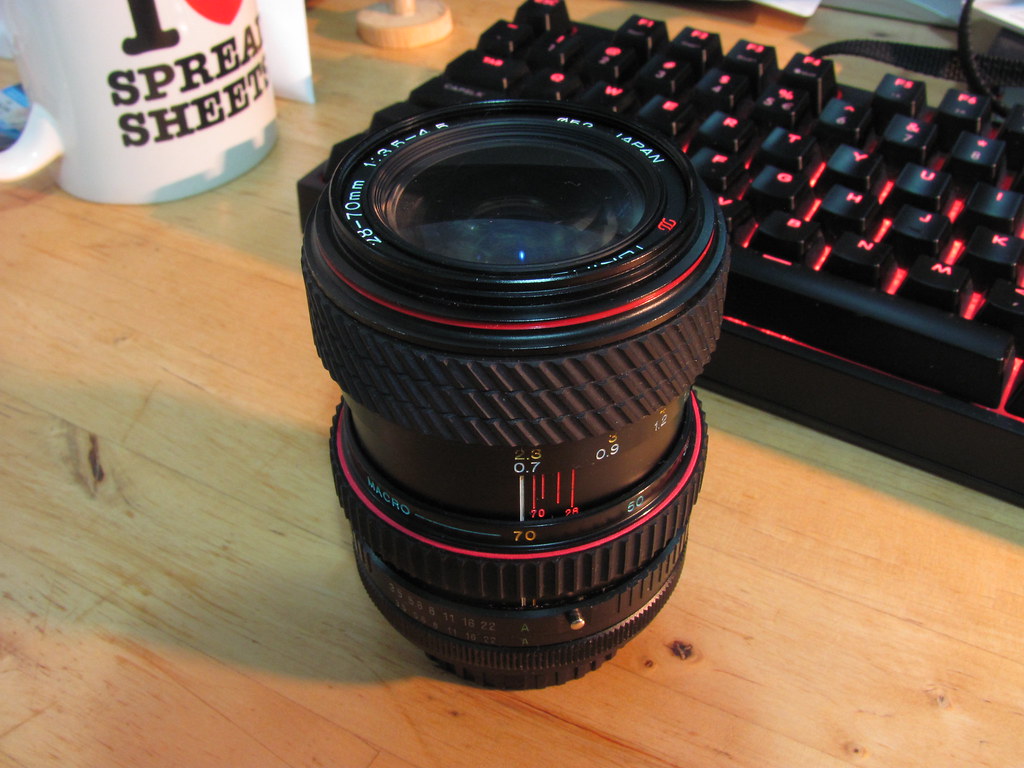 I wasn’t able to do the focus ring at the same time because it was night. I need to be able to focus at infinity to line the focus ring up to the front element correctly, and that’s much easier in daylight. The focus ring rubber isn’t as stretched so I doubt it will need the same foam treatment. However, if padding was required, I think I would do it with black foam so that it wouldn’t look too busy.